Airlines and airports have to change their flight schedules at least twice a year, just in time for the daylight saving time change. At the end of March, the summer flight schedule comes into effect, and at the end of October, it's the winter flight schedule. This poses logistical challenges for European airports in particular, but also for North American ones. How can these be solved? 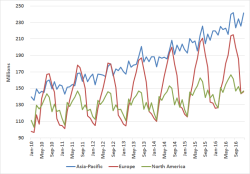 Altered flight times, different frequency rates, but also a modified route network accompany the changeover. The aim is to adapt to seasonal fluctuations. The chart illustrates the annual fluctuations in passenger numbers over a period of seven years.

Europe is subject to particularly pronounced seasonal fluctuations. The reason is mainly that the vacation season in summer results in a significant increase in passengers and thus flights. In winter, on the other hand, European flight movements drop significantly. The difference with the Asia-Pacific region, where there are large numbers of flights all year round due to the long distances involved, is particularly pronounced. In Europe, on the other hand, the distances are much shorter, which is why many trips outside of the vacation season are made by car, bus, or train.

This unique situation poses significant challenges for European airports but also for North American airports. Are the infrastructure resources of many airports perfectly adequate from fall through winter to spring? Do they reach their limits during the summer? Parking positions become scarce, and taxiways become jammed with vacation flights. And so, how hotspots develop. In addition, airports have too few employees during the vacation period. In winter, on the other hand, there is a cost-intensive surplus in many areas.

How do airports manage seasonal fluctuations?

Modern airport operations software enables airport operators to optimize the management of seasonal flight schedules and thus their resources. Automated flight plan import is the preferred method for this. The flight plan import is completed via interfaces to airport coordinators or flight planning systems such as SCORE. It can also be accomplished via the IATA standard Standard Schedules Information (SSIM). Airport employees can import the SSIM files provided by airlines into the airport management software and store them as planning data in the database.

Our Airport Operations Management Software SKYport offers you all these possibilities. In combination with optional modules, our airport software can be used to create an individual set of rules that optimally distributes the available resources and thus saves costs.