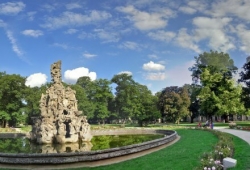 The Huguenot town on the river Regnitz has a population of about 100,000. In the 17th century, many Huguenots fled France and came to Erlangen, which at that time was still a small town. To accommodate all the refugees, an ideal city in Baroque layout was built next to the existing settlement and called “new town Erlangen”. Today, this part of town forms the city center. The Hugenottenkirche (Huguenot Church) is one of the oldest of its kind outside of France. The Friedrich-Alexander University – the second largest university in Bavaria with some 25,000 students – turns Erlangen into a young, vibrant student city with numerous research institutions, such as the Fraunhofer Institute and the Max Planck Institute. Notable events include the Erlanger Bergkirchweih (beer festival), the Poetry Festival and the monthly Poetry Slam at the E-Werk. Celebrities from Erlangen include Georg Simon Ohm, Klaus Karl Kraus and Lothar Matthäus.

Jobs of the ISO-Gruppe in Erlangen

At the moment there are no vacancies.