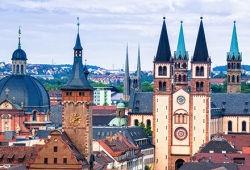 With some 130,000 inhabitants, Würzburg is one of the three regional centers in Bavaria. Accordingly, it is being further developed as a nationally significant location for education, trade, culture, sport and science. The Julius Maximilian University is the oldest university in Bavaria. This makes the city one of Germany’s classic university cities. In 1895, Wilhelm Conrad Röntgen discovered the X-rays at the Institute of Physics, for which he received the (first) Nobel Prize in Physics in 1901. With its countless wine cellars and wineries – as well as its characteristic Bocksbeutel – Würzburg is the heart of the Franconian wine region. Three of Germany’s fifteen largest wineries are located in here. The Residenz palace with its Hofgarten and Residenzplatz was declared a UNESCO World Heritage Site in 1981, and the famous Africa Festival make Würzburg an attractive destination for excursions.

Jobs of the ISO-Gruppe in Würzburg