Already in late 2017 the news magazine FOCUS-Business confirmed that the ISO Recruiting Consultants (IRC) were growing strongly. In a new study, the IRC was able to build on the performance of the previous year, thus earning the title "Growth Champion 2019". 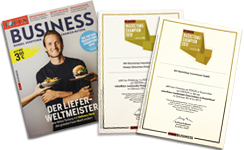 In the category "Human Resources”, the ISO Recruiting Consultants ranked 3rd, in the overall ranking the IRC ranked among the top 30 of all 500 companies considered. The list of 500 Growth Champions includes companies who achieved a particularly high growth percentage in turnover per year between 2014 and 2017. FOCUS-Business considered both privately owned and listed companies.

The ISO Recruiting Consultants have been among the top recruiters of IT specialists in Germany since 2013. Their success is based on three components: The consultants of IRC deal intensively with the client companies and their projects. In a multi-stage selection process, the IRC produces comprehensive assessments of the candidates’ professional and personal qualifications. This is possible in the necessary depth thanks to the broadly based technical and industry knowledge in IT of the ISO Recruiting Consultants – which is continuously expanded.

“In our candidates we focus on quality, not quantity. Our aim is to fill vacancies of our customers straightforwardly with the right person. This saves companies time and money," explains Dennis Stevens, Managing Director of ISO Recruiting Consultants.

FOCUS-Business presents the top list of Growth Champions and describes how the listed companies were able to grow so successfully. In addition, the magazine analyses the opportunities created by change in the economy. The nominated companies must be independent (no subsidiaries, no branches), have their headquarters in Germany and have a turnover of at least 100,000 euros in 2014 and a turnover of at least 1.8 million euros in 2017.

On behalf of FOCUS-Business, the data company Statista searched more than 2 million commercial register entries, resulting in thousands of companies with above-average growth. Many more companies were invited to apply for the Growth Champions 2019. Those named in the FOCUS top list received the "Growth Champion 2019" award. The corresponding issue of FOCUS-Business went on sale on 16 October.