Without them, our modern world would be out of sync: traffic guidance systems would no longer work, beer bottles would only be half full, and milking machines would only relieve cows irregularly. 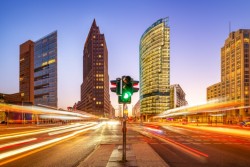 To make sure everything runs smoothly, companies like Siemens rely on the ISO-Gruppe's software expertise in automation technology.

We are talking about so-called programmable logic controllers, or "PLCs" for short. They are one of the most important inventions in automation technology and control machines, plants or robots in industry. PLCs receive signals and convert them into a desired action according to their programming.

Since the invention of PLCs over five decades ago, this technology has become increasingly relevant to society. Despite this, many people are unaware of the importance of these inconspicuous string pullers: without PLCs, much of industry and many areas of daily life would come to a standstill. From elevators and escalators to traffic lights and street lighting to sewage treatment plants and power plants: PLCs are more common than you might think.

Even under difficult conditions such as dust, humidity, heat or cold, they work flawlessly. Moreover, they save energy and space, are compatible with other systems, very reliable and flexible. With the appropriate PLC programming, the controller can handle just about any task.

In its simplest form, a programmable logic controller consists of three main components. One of these is the processing unit. Here, there is a CPU and a memory, which process the signals according to the PLC programming.

In order for a controller to know what to do with the signals, it needs target-oriented PLC programming.

And this is exactly where the ISO-Gruppe comes into play: It is involved in the development of the software that makes it possible to develop PLC programs so that they fulfill complex tasks and requirements in automation technology. This makes it possible to convert input signals into concrete actions.

Stephan Schaer, Division Manager Automation Technology ISO-Gruppe: "We have been working successfully with Siemens for over 30 years and can look back on more than a dozen projects. This also earned us the title 'Supplier of the Year'. We look forward to future cooperation and further exciting projects in automation technology."

In this way, the ISO-Gruppe will continue to play its part in ensuring that traffic lights, milking machines and breweries are equipped with the little technical helpers. In this way, milk, beer and road traffic can be relied on to flow as usual.