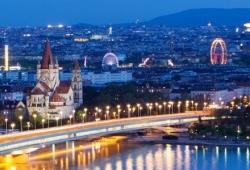 Vienna is the capital of Austria and has a population of about 1.7 million. It is named after the river Wien, on which it is located. Vienna was first mentioned only in the 13th Century. It is unclear if the earlier references refer to the river or the town. For several centuries, Vienna was the imperial capital and seat of the residence of the Emperor of Austria, which is why Schönbrunn Palace was built here in th 17th century. Further attractions include Stephansdom (St. Stephen's Cathedral), the Vienna Prater with its historic Ferris wheel, Belvedere Palace and the Vienna State Opera, where the annual opera ball takes place. The largest museum is the Imperial Palace, which includes the Sisi Museum and both the secular and sacred treasury and the Imperial Crown. As for culinary specialties, the Austria capital is world famous for Wiener schnitzel and Sachertorte.

Jobs of the ISO-Gruppe in Vienna